Some basic scientific terms you need to be familiar with:

Scientists are people who have acquired knowledge and are trained in the many fields of sciences to try to explain phenomena, discover new things, and solve problems.
The method used by scientists to do all of the above is generally known as "the Scientific Method".

The Scientific Method is a process of discovery which makes use of several important steps.

The most common steps of a simplified Scientific Method of discovery are:

The outcome of an experiment may reaveal different outcomes and take scientistis in different paths and produce many different results.

A Theory is a consistent explanation to observations that can be supported in laboratory experiments but that could, at some future point, be proven wrong or modified.

A Model is a probable explanation of the causes of a problem at its early stages of inception.

A Hypothesis is an educated guess that scientists make regarding the solution to a problem or its causes.

An Observation is a fact, a finding, a mathematiuca, or scientific datta collected during an eperiment or a described behaviour of the subject of an experiment. During an experiment scientists make many observations.

In general, Observations can be grouped as one of two possible categories:

Measuring, investigating, and observing involves the use of variables. Variables are measurable factors or quantities taken during the course on an experiment.

There can be two types of variables:

Dependent variables are measurable quantities that are influenced by other factors during an experiment.

Independent variables are measurable quantities that are not influenced by other factors during an experiment.

Example: During an experiment  water is heated in a beaker, over a hot plate, for 5 min.  The temperature of the water is recorded every 30 s with a thermometer, as the water in the beaker is being heated. 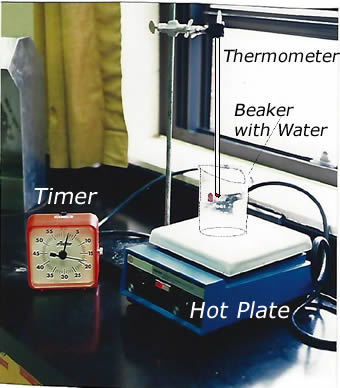